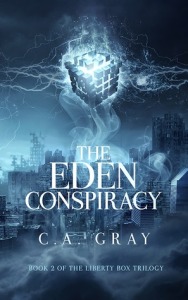 Can the truth set you free?

The refugee caves have been destroyed, and most of the refugees are dead. The Potentate now knows of their existence and will stop at nothing to wipe them out completely. He suspects that terrorist Jackson MacNamera is among them, as well as reporter Kate Brandeis’s fiancé, hacker Will Anderson—and probably therefore Kate herself. Now that the Potentate is aware of security threats, most of the strategies the rebels used to get back onto the grid before now no longer work. The Potentate knows the rebels are on foot, and he knows they were at the caves not long ago—they can’t get far.

The remaining rebels, among them Jackson and Kate, have Kate’s fiancé Will to thank for their survival: he arrived back from the dead and in the nick of time, bearing classified information about the Potentate’s plans to expand his influence internationally. But the remaining rebels and the Council cannot agree on whether their top priority should be spreading truth far and wide and freeing as many citizens from government control as possible, knowing that they will likely die in the process—or escaping to New Estonia, in hopes that they might live out the rest of their days in peace.

Kate, meanwhile, finds herself torn: between Jackson and the fiancé she thought she lost, and between the damsel-in-distress she once was, and the rebel she believes she has always been underneath. Whether the other hunters will support her or no, she knows she must use her influence over the people of the Republic to tell them the truth, no matter the cost. But is she strong enough to withstand the government’s lies?

“…become aware of the things that you’re thinking about, and determine two things: whether the thought is a truth or a lie, and whether it serves your ultimate goal in the moment. Even a true thought might not be worth dwelling on.”

This review was a long time coming. I had originally reviewed the first book in this series a little over a year ago but have been quite busy with law school and haven’t been able to get around to the rest of the series until now. You can find the review to the first book in the series, The Liberty Box, here.

This book picks up right where the first one left off, the caves have been destroyed and most of the refugee’s have been killed. The survivors now have to go on the run in order to avoid being caught and killed for their resistance. The book still follows Kate and Jackson but we have a new addition to the group, Will, Kate’s fiancé.

This story was pretty face paced and straight forward. I really like how Gray incorporates meditation and thinking that could (and probably should) be applied to our everyday lives. I do have to admit that Kate was kind of annoying for me towards the beginning. As she is trying to rediscover who she is now that she isn’t brainwashed, she can come off as a bit whiny sometimes. But I think in the last book in the series, we will see her settle into the person she is supposed to be and this little annoyance will disappear.

The ending to the story was definitely not something I saw coming, it left us on a cliffhanger and I am excited to see how Gray brings the series to a close in the last book!

Overall, I enjoyed the book and how it was straightforward but still enjoyable to read. I look forward to reading the last one in the series and I hope that Gray can carry us through to the end and tie it all up nicely (I’m sure she will). Happy reading, everyone!