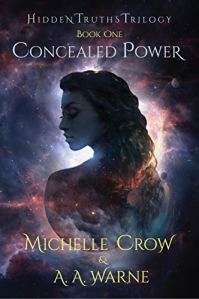 For centuries, Earth has served as the battleground for a secret war between a reptilian alien species and the clandestine human organization dedicated to eradication this extraterrestrial threat. But when a single woman becomes the focal point of this brutal conflict, the fate of the planet alters forever…

Life hasn’t been easy for Riley Anbar since her grandmother’s death. Between struggling to run the family business, dealing with troubling psychic visions, and puzzling over unanswered questions about the parents she never knew, Riley is doing her best just to get by. After a pair of chance encounters with two mysterious men, Riley finds herself thrust into danger as both human and alien forces converge on her once-ordinary life.

But in this war, there is no clear boundary between good and evil. Both factions are determined to use Riley for their own ends, and they’re willing to endanger everyone around her to achieve their goals. Caught between the two men who have captured her heart and the secrets of her own past, what choice will Riley make when she discovers neither side is in the right?

“Dedicated to those of us a little less human.”

I received a copy of this book from the authors in exchange for an honest review of this book. Crow and Warne wrote this book together from different countries, which alone is an amazing feat. And can we talk about the cover art? It’s gorgeous! Alien books are not too common nowadays, especially alien books where the aliens are actually alien looking rather than being gorgeous human beings all the time. The story follows Riley as she meets two men who aren’t exactly normal. One is an alien species that humans are completely unaware of and the other belongs to a secret society meant to stop the aliens.

I wasn’t too sure about the inner thoughts of the characters being reflected to the readers so often, but I actually loved it once I got used to it. We often see what characters say and do but it’s not very often we get to see an inner monologue with the thought processes of the characters.

I do have to admit, I ship Riley and Mareo more than Riley and Liam. I was actually kind of upset we didn’t get to see as much Mareo in this book, it was mostly centered around Liam. Liam kind of bothered me because he was always frantic and hectic in his interactions, he didn’t seem to have a real connection with Riley. If Crow and Warne are going to go where I think with the rest of the series, perhaps Liam’s actions make sense and I will be satisfied with the results. I am excited to see Mareo and Riley together more (hopefully in the next book).

Overall, I did enjoy this book. I read it a couple of hours a night and in the mornings to finish it in a few days. I will be looking for the next book in the series because I want to know what happens to all of the characters and how everything comes together. You should too! Happy reading, everyone.