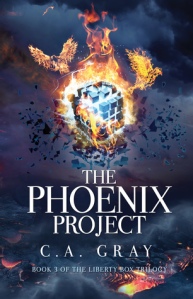 Only the TRUTH you know can set you free…

The haven city of Beckenshire has been demolished, and most of the rebels lie beneath the rubble. The few that remain scramble to communicate with the the outside world, knowing that if they are to stand a chance in the coming war, they can’t do it alone. In a last ditch effort to grow their ranks, the remaining rebels systematically destroy the repeaters which help to propagate the control center signals. And it’s working: citizens in targeted cities are waking up in droves. But Ben Voltolini will stop at nothing to quell the uprising before it has a chance to get off the ground. And he has one major ace up his sleeve: Kate Brandeis.

During Kate’s broadcast to the nation, Voltolini unleashed targeted brainwave signals against her, causing her to allow both Jackson MacNamera’s capture, and her own. Now, despite Voltolini’s exquisite wining and dining, she can’t seem to stop the panic attacks. Whom can she trust? What is truth? Is there even such a thing?

Meanwhile, imprisoned and hopeless, Jackson realizes the depths of his feelings for Kate only after he has already lost her. The incredible self-control upon which he prides himself gets put to the ultimate test when he meets an unlikely ally who just may turn the tide in the rebels’ favor—but only if Jackson can put aside his own bitterness.

In this gripping conclusion to The Liberty Box Trilogy, new and surprising alliances are formed, passions run high, and our heroes learn what they are really made of. Do they have what it takes to fight for freedom—even if it means paying the ultimate price?

“If there is an underlying theme to the story, it is this hard-learned lesson from my own life: your thoughts and your beliefs influence your actions; your actions form your habits, and your habits shape your life….just make sure that what you’re thinking and believing is both true and beneficial to you!”

It has taken me awhile to find the time to finish this series, but I am happy that I did. The Phoenix Project is the last book in The Liberty Box series. It follows Kate Brandeis and Jackson MacNamera as they continue to try to free brainwashed people from under the rule of Ben Voltolini. No spoilers but the ending was a long time coming.

I really liked how Gray made certain characters personalities really come through in this book. In particular, I am talking about Alec. I won’t say anything other than I didn’t see it coming until the end but I am happy with how Gray developed the character. She also introduced us to the character Joe. Joe ended up being a really important character to the climax of the story and he wasn’t a main character, which I kind of liked.

Kate was less annoying (I’m sorry) in this one. She was much more tolerable and really seemed to settle into herself in this book which was what we, as readers, were waiting for. But I am happy with where she ended up and how the story came to an end.

Overall, this series was an interesting and creative story. I think it was very unique and unlike any other series that I have read. I feel very grateful that Gray contacted me to review the series and for the opportunity to have read it and to have experienced the world that Gray brought to life. If you’re looking for a series that is refreshing and new, this is the series for you. It’s full of action, psychology, and romance all packed into a three book series that wraps the plot up nicely and leaves readers satisfied. I hope you enjoy it as much as I did. Happy reading!