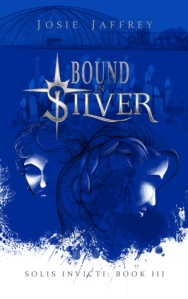 Exiled from the city and from the affections of the vampire who had loved her, Emmy finds herself pushed into a captivity she never expected to experience. With the bond to her former protector broken, she knows that the chance to turn Silver is now a monstrous obligation rather than a glittering opportunity.

In an unfamiliar place among unfamiliar people, Emmy feels deserted by those Silver she had thought of as friends, out of sight and out of mind. If only her enemies were equally forgetful.

I did it again… and stayed up reading this book half the night without keeping track of quotes. If anything, that shows how good this series is.

I received this book from the author in exchange for my honest opinion.

This is the third book in the Solis Invicti series. It follows Emilia as she finds herself exiled from the city and taken to a farm to be punished through labor. Unfortunately, the Silvers who over oversee the farm are not exactly the friendliest and seem to enjoy fun at the expense of the humans who work there; Emilia being one of them.

It seems that my ship is not going to happen but the way that it was written up in this book, I don’t particularly mind. I was kind of upset because there was hardly any interaction between Emilia, Drew, or Sol. Emilia was locked up on the farm with another human, Oliver, for pretty much the whole book. We get to see how Emilia interacts with another human and survives without the protection of Silvers who like her, but we don’t get to see any Silver romantic interests.

I did see where Jaffrey was taking the plot in the last book and I am happy that she went there. I just hope that it turns out the way that I want it to and that everyone can be happy in the end. I’m sorry that is vague; no spoilers allowed.

Overall, this is probably my least favorite book in the series and that is only because there are no ships in it. If that is the only problem I had then it must be a pretty good book. I have really enjoyed this series so far and am excited to see what Jaffrey has in store for us for the last book in the series.