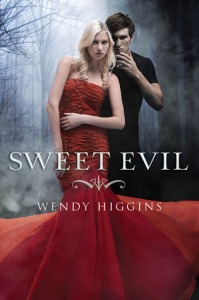 What if there were teens whose lives literally depended on being bad influences?

This is the reality for sons and daughters of fallen angels.

Tenderhearted Southern girl Anna Whitt was born with the sixth sense to see and feel emotions of other people. She’s aware of a struggle within herself, an inexplicable pull toward danger, but it isn’t until she turns sixteen and meets the alluring Kaidan Rowe that she discovers her terrifying heritage and her willpower is put to the test. He’s the boy your daddy warned you about. If only someone had warned Anna.

Forced to face her destiny, will Anna embrace her halo or her horns?

“’Which is your favorite place?’ I asked. ‘I’ve never been terribly attached to any place. I guess it would have to be…here.’ I stopped midchew and examined his face. He wouldn’t look at me. He was clenching his jaw, tense. Was he serious or was he teasing me? I swallowed my bite. ‘The Texas panhandle?’ I asked. ‘No.” He seemed to choose each word with deliberate care. ‘I mean here in this car. With you.’”

“The purpose of life is to find your way back to a spiritual way of thinking and living—to be able to get past the physical stuff. That’s pretty much the whole test. And every soul is given talents and strengths to help them along the way.”

“He’d been right when he said the truth could hurt far worse than any lie.”

I’m going to start this review by telling you all how I found this book. I previously read and reviewed the Lux series. It wasn’t my first time reading it but it was my first time reviewing it. During the reread for the review, I noticed that the main characters had to get fake IDs under the names of characters from Katy’s favorite book. So, I googled the characters names to see if they were real characters in a book and they were! They were the characters from this book and the synopsis sounded interesting so I decided to read it. I’m not entirely sure why there were bad reviews on Goodreads but I have noticed that a lot of people are very harsh on a lot of books that I end up loving. The lesson to be learned is don’t listen to reviews and give a book a chance because you might love it despite it not being another readers cup of tea.  I was not familiar with the author in the slightest but I’m very glad that I read it because once I started, I couldn’t put it down. I ended up staying up until after 3am to finish it.

I kind of think that the title Sweet Evil is lame, but this book is anything but lame. The story follows a girl named Anna who is adopted at a young age and has special powers. Because she was adopted she doesn’t know why she has these powers and tries hard to have a normal life. Then Kaidan Rowe happens. Next thing she knows, Anna is going across country with Kaidan finding out as much as she can about this world she didn’t know existed but she is a part of, all while falling for the off-limits Kai.

I didn’t like that Kai is soooooooo off-limits (but understandably so). Higgins does a really good job at making it understandable why Kai is the way he is. It’s just so frustrating because you ship him with Anna and you want it to happen. I found myself thinking “screw the rules, get together already”. And maybe they will….eventually.

I love that Anna and Kai mesh so well together. They aren’t the same, but Anna shows Kai a different way to live and Kai brings Anna in to his world. They both are learning and discovering new things together. I related to how Anna felt after certain things happened between Kai and her. How she was struggling to move on and her overall thought process; I’ve been there. I was reading it and literally thinking “this is me”. I know this is vague, but you’ll get it once you read it. If you’ve ever gone through any sort of breakup or rejection you’ll read it and go “Wow. I’m not the only one who thinks like this”. I know I did.

Overall, I loved this book. It wasn’t too confusing and it has just the right amount of mystery and intrigue. Now all this series needs is for my ship to get together (it better get together). I highly, highly recommend this book if you want a romance that makes your heart soar and then crash (don’t worry, it should get better). Like I said, don’t judge the book based on other reviews, including my own.  I’m here to write about books that I have read in hopes of inspiring you to read them if you’re looking for your next book series and aren’t sure what to read. I’m not here to tell you that a book isn’t worth your time or that you have to read the series. I hope you read this review, and make your own judgement of whether this would be something your interested in. Until next time, happy reading!