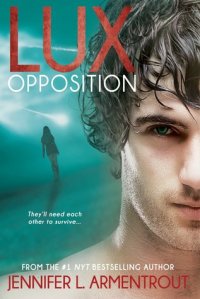 Katy knows the world changed the night the Luxen came.

She can’t believe Daemon welcomed his race or stood by as his kind threatened to obliterate every last human and hybrid on Earth. But the lines between good and bad have blurred, and love has become an emotion that could destroy her—could destroy them all.

Daemon will do anything to save those he loves, even if it means betrayal.

They must team with an unlikely enemy if there is any chance of surviving the invasion. But when it quickly becomes impossible to tell friend from foe, and the world is crumbling around them, they may lose everything— even what they cherish most—to ensure the survival of their friends…and mankind.

War has come to Earth. And no matter the outcome, the future will never be the same for those left standing..

“It didn’t matter how many hours, days, months, or years we had stretched out in front of us; we’d always be together. This kind of love was the real deal, stronger than a whole planet full of psycho aliens and an entire government.”

“I broke every rule of my kind to heal you and keep you with me. I married you and burned down an entire city to keep you save. I’ve killed for you. Did you think that I’d forget what you mean to me? That anything in this world—in any world—would be stronger than my love for you?”

“To this day, I had no idea how he got that dip on either side of his hips. Like what kind of sit-ups does one do for that? The only time I sat up from laying down was to get out of bed. Or get some chocolate. Or a book.”

Opposition is technically the last book in the Lux series. There is Oblivion which is a collection of all the books from Daemon’s point of view as well as an apparent novella called The Wedding (I wonder what that’s about). There is also an adult spin-off called Obsession telling the story of Hunter and Serena who we have met before and will see again in this book. Another spin-off that has not come out yet is called The Darkest Star; it looks like this will be more than a standalone book.

The last book ends on a pretty big cliff hanger and this book picks up where the last left off. This book is definitely the most eventful of the series; it has to be in order to tie everything up. Opposition is full of plot twists. As soon as you think you know what is happening, Armentrout does a 180 and makes you question everything you thought you knew. Towards the start of the book, your heart will be breaking but it will get all stitched up nicely ONLY TO BE BROKEN AGAIN and then fixed. It’s like Armentrout likes making us hurt, throwing us a band-aid, and then making us hurt again.

What I like so much about this book outside of all the action and plot twist is that Armentrout has a lot of references to other books in the series. She revisits topics brought up in previous books and touches on things that will hopefully happen in the spin-off books. We see more of Hunter and Serena, as well as, Luc and Nadia. She leaves a little opening for the latter that will hopefully be the beginning of the Origin series. Armentrout also does an amazing job (like always) at using pop-culture references to keep some humor in the book. This keeps the mood from being too down and makes you aggressively exhale nose through your nose (also known as a silently laugh).

This is honestly probably the best book in the series simply because it ties up all the loose ends, covers such a wide variety at a nice pace without being confusing, and I personally thought it was the most well written in the series.

The sad thing is that it leaves you wanting more and there is no more to give in the series except for the short novella (Lux #5.5) and the two spin-offs. Hopefully they are just as good as this series has been and that we get to see a peak at Katy and Daemon from other character’s points of view, because I don’t think I’ll survive never hearing from them again. Until next time, happy reading!

One thought on “Review: Opposition by Jennifer L. Armentrout”